Back in 2013, I released an app called Static for iOS. It was a basic white noise app, with a few different sound choices. It had a very opinionated interface, complete with an era-appropriate speaker grill artwork. 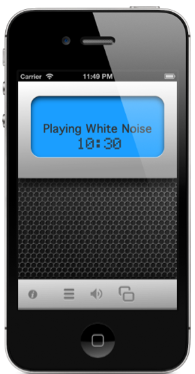 Building Static accomplished two things for me. First, it allowed me to build a free app that attempted monetization with in-app-purchase (IAP). I’d previously only built apps with nominal fees, but had never given anything away. Second, it saved me from buying a noise machine.

I sleep the best with constant noise around me. If things are too quite, it’s difficult for me to find good rest. Static fundamentally changed my sleeping habits, because it meant I could keep a sound machine with me at all times. Regardless of how quiet a hotel, my in-law’s guest room, or my own bedroom was, I could fire up Static and know it would help carry me away to rest.

Static has become a staple in our home. Our oldest boys share a room and a 4th Generation iPod Touch (limited to iOS 6.x). That iPod runs Static every single night, for no fewer than 10 hours. In the master bedroom, an older iPhone 4S runs Static non-stop. It’s eerily quiet when, on the rare occasion, it is accidentally unplugged and eventually stops due to low battery.

I anticipated the app would be used on older devices, since that’s what I knew I would do - grab an old phone from the desk drawer and repurpose it as a noise machine.

Until iOS 11, I’ve never had a compelling reason to update the app. Frankly, it continued to receive quite a few downloads and even full version unlocks[1], in spite of having last been updated in 2013. The app was never updated for iPhone 6, Plus sizes, 64 bit, or even ARC. Of course, with the removal of 32 bit support in iOS 11, I needed to update that app in order to use it on my modern devices. Instead of just trying to tweak the UI to work, I decided to rethink it, taking inspiration from the simple style I used on Astra. I’m pretty happy with the visual direction Static is headed.

With an updated codebase, I can more easily add new features, the first of which would probably be more sounds.

Have a suggestion? Use the Contact feature inside Static, or find me on Twitter and drop me a note. If you don’t already have the app, please grab a copy from the App Store and give it a try.